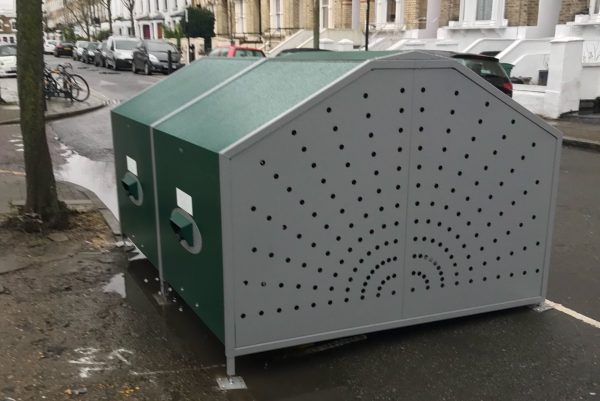 Most of Islington’s flats and houses were built without cycle storage in mind. Especially given the trend to convert multi-storey terraced houses into several flats, the need for a secure place to store bicycles has never been greater.

Enter the bikehangar. Units from Cyclehoop and Asgard provide secure cycle storage, which can be placed on the street in parking bays. With a bikehangar, one car parking space can house six bicycles, so this is an incredibly efficient use of limited road space. And because your bike is under lock and key, you’ll know it will still be there in the morning!

In 2016, Islington ran a trial of two Cyclehoop Bikehangars: Crayford Road and Hanley Road. This was a success, with both units fully subscribed. In 2017, Islington purchased 18 units from Asgard and conducted public consultations about them. In January–February 2018, the units were installed.

For 4 years (2013–2017), TfL provided funding for bike parking through the Borough Cycling Programme. During that time, they handed out grants worth hundreds of thousands of pounds to boroughs, many of which installed Bikehangars from Cyclehoop. The money (£3000 per unit) went towards purchasing the hangar itself and a maintenance contract for several years. The network of Cyclehoop Bikehangars is extensive, with particular abundance in Waltham Forest, Hackney, Southwark and Lambeth. Unfortunately, Islington only received a few tens of thousands of pounds from this Programme.

The old units from Cyclehoop cost £25/year. As described above, these were effectively subsidised by TfL. The new units from Asgard don’t have an equivalent subsidy, and they cost £104/year. Islington has added management of cycle parking to iCo (PDF), their Local Authority Trading Company. (You can learn more about LATCs by reading this article.) While we applaud Islington thinking creatively about how to cost-effectively maintain bikehangar units, we want to make sure that any profit from yearly fees is only used to buy new bikehangars.

The Council says that it has given priority to providing secure bike parking on council estates. About 600 secure, covered, lockable bike spaces have been provided. Money for these came from a separate source which can only be used for estates, and ensuring that council tenants have adequate bike storage is very welcome. However, we don’t know the extent of the unmet demand. Anecdotal evidence indicates that getting secure bike storage on a council estate still isn’t quick or easy. And with the post-Grenfell push to make sure that fire exits are clear, some estate residents have found that they no longer have a place to store their bike.

How do I get a space?

If you live on an estate: Contact your area housing office and your councillors.

If you live in a private residence: Contact the Public Realm team at Islington and ask to have your name and address added to the waiting list. Your chances of success are higher if you can get 6 people on the same street to all apply together.