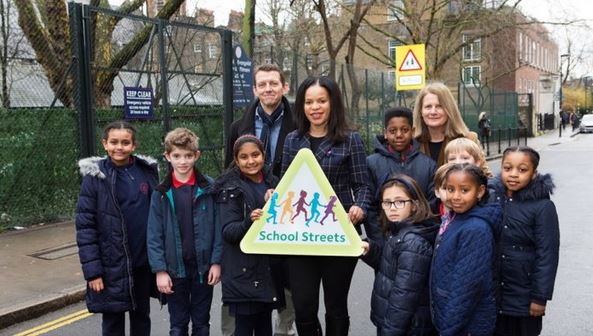 A School Street Scheme is where a road with a school temporarily closes to become a pedestrian and cycle zone during the school’s opening and closing times. Temporary closing of roads outside schools will help to reduce congestion and pollution at the school gates as well as making it easier and safer for children to get to and from school.

The first school street to be implemented in November 2018 was Duncan Street, close to the St John Evangelist Catholic Primary School, with a further 7 school streets in March 2019.  Two more are planned for May and a further 15 by 31 March 2020. That would be 25 Schools Streets in 2020 thus giving a 50% coverage of school streets in the borough.

There are many roads which are urgent candidates for school streets, such as Thornhill Road; have a look at the video link  (thanks to @cycleoptic) https://twitter.com/i/status/1114890202458337281

If you have children at a school which doesn’t yet have a school street, then  talk to the teachers and the PTA and the children themselves  No-one wants their children breathing in polluted air from rat running traffic or from idling cars at the school gates, or risking them being caught up in traffic.  Schools where school streets have been implemented have seen more of their children taking up walking, cycling and scooting all of which have great benefits for their general health and wellbeing.

https://www.facebook.com/MumsforLungs/
Mums for Lungs is a group of parents concerned about the effects of poor air quality on our health, and in particular on babies and children. We believe that national politicians are failing to take sufficient action to tackle Britain’s air pollution crisis.