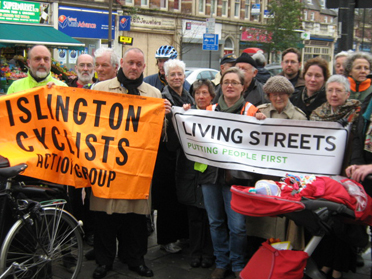 ICAG members joined Living Street members on Monday 7 December 2009 at Madras Place – the notorious crossing of Holloway Road near the Central Library and St Magdalene’s Church. Councillors Greg Foxsmith and Catherine West were there, but not Mayor Johnson! We are waiting for a further meeting with the council, made more urgent
by another pedestrian injury (caused by a motor vehicle) the week
before last. Lisa Pontecorva died on this crossing last year – the Heavy Goods vehicle that killed her did not have the full complement of mirrors.

After a meeting with  council and TfL officers before Christmas to look at proposals to improve the cycle and pedestrian crossings of Holloway Road at Madras Place, we were asked to comment on the 4 schemes that had been proposed.  This is the reply we sent.

Both ICAG and Living Streets have consulted widely with our members on all the options but came out firmly in support of the best from options 1 and 3 combined.  Chris Ashby (ICAG), Caroline Russell (Living Streets) and Robin Hull (local resident) met at Madras Place on Tuesday last week to have a further look at the options on site.

We discounted options 2 and 4 and considered option 3 with the addition of the pedestrian crossing north of the junction from option 1.

We’d be interested to hear the reasoning behind the proposal to use “keep clear” signs instead of yellow boxes.  We are concerned that “Keep Clear” signs, unlike the yellow boxes, are not legally enforceable.

We would encourage further consideration be given to a raised table or to implementation of a 20 mph limit, which might smooth the flow of traffic along Holloway Rd by decreasing the stop start driving associated with 30mph limits in built up areas.

When we met in December officers undertook to look at interim measures that might be implemented to mitigate the current dangers at the junction.  We look forward to hearing whether it will be possible to introduce a light (as an interim measure) on the existing overhead gantry to show red to northbound vehicles when cyclists have a green light to cross east/west.