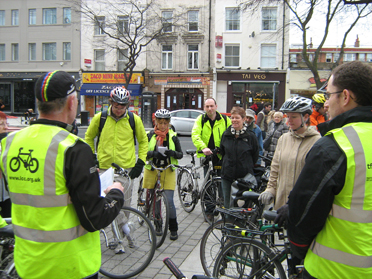 We were so pleased with the response to our invitation. Over twenty people turned up at the town hall to go on an instructive ride.

Stephen Taylor briefs the veloteers before we set out.

We move away into Upper Street.

Having passed along Barnsbury Road and checked out the cycle lanes there, we reached Penn Road and looked at the award winning improvement to the junction there.

We were told of some of the problems at the Goswell Road triangle.

Having left the Highbury and Islington roundabout, we passed through the exit towards Highbury Fields – focus of a long campaign –  and stopped outside Central Library. We discussed the works at Horsell Road and  the campaign at Madras Place
Then off to the Olden Gardens for the launch and training session. Guest speakers were Tom Bogdanowicz (LCC campaigns manager) and Councilor Greg Foxsmith (who leads on the Environment).

Then having had lunch, we were ready to get to work!

Veloteers were asked to “adopt a pothole” and identify issues in their area that need attention.