We’d like to thank Chris Ashby for organising a tribute for the cyclist who was killed in Holloway Road on Saturday, 6 August.  We were amazed by the number of people who attended, but this was possibly because it was put on our Facebook and Twitter pages.  Tom’s father Keith spoke briefly and we observed a minute’s silence.  The Islington Tribune published the following on line.

Father of cyclist Sam Harding, pleads for safer roads in the Islington Tribune

A HEARTBROKEN father has called for improved safety on Islington roads after the death of the third cyclist this year.

Retired teacher Keith Harding said he did not blame anyone for the death of his son, Sam, 25, in a collision with a bus in Holloway Road on Saturday afternoon.
But he added that as a society we are encouraging more people to cycle while not providing sufficient safety.
“Something needs to be done for cycling,” he said. “It may be reducing the speed limit to 20mph or dedicated cycle lanes. But some of our roads are not designed for cyclists.”
Mr Harding joined up to 100 friends and cyclists on Wednesday evening at the spot where Sam was killed opposite the junction with Jackson Road.
Flowers were laid and prayers said at a tribute organised by Islington Cycling Action Group.
Sam, who worked for Angel-based online tourist firm, Voyage Privé, died under a single-decker 153 bus at about 1pm outside McDonald’s.
He is thought to have been trying to avoid a parked car with an open door immediately before the accident happened.
A 31-year-old motorist was arrested at the scene and has been bailed to return to a police station in December.
Mr Harding, a Blue Badge London Tour Guide, said his son was an experienced cyclist.
“I understand that the bus driver went to hospital with shock,” he said. “I don’t blame anyone for what happened. I’ve been a cyclist and I’ve been a driver. It is the sort of accident that can happen.
“But I do feel there is an issue about safety for cyclists on the road.
“Sam was a wonderful son with a great sense of humour. We’re obviously going to miss him.”
In the other two cycling fatalities this year Dr Colin Hawkes, 64, a leading child protection expert, died in Carleton Road, Holloway, in January, and painter and decorator Gavin Taylor, 40, was killed in Wolsey Road, Newington Green, in April.
Holloway Road also claimed the life of cyclist Lisa Pontecorvo in 2008.
Chris Ashby, of Islington Cyclists Action Group, called for a 20mph speed limit to be extended from the borough’s smaller roads to ALL  roads. He added: “It’s desperately sad. Our deepest sympathies go out to the family.”
“We don’t know who is to blame, but we always advise cyclists to stay well away from parked vehicles. Drivers just so often open their doors and it’s the most frequent cause of a collision.”
An inquest was opened and adjourned into Sam’s death on Monday. Detectives are appealing for witnesses to contact them on 020 8998 5319.
Floral tributes were left at the scene of the collision. 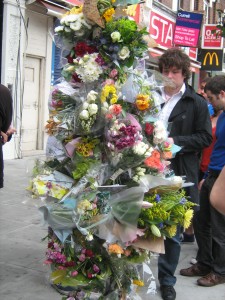