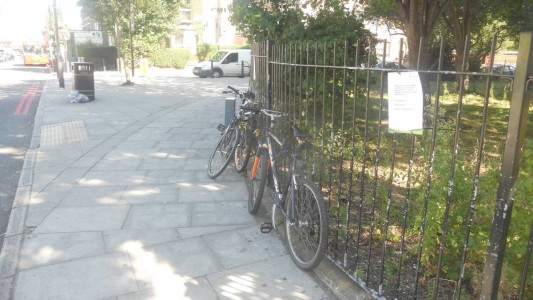 These bikes may look pretty harmless. But not to the keen eye of an Islington Council Quality Assurance officer. The notice says:

Dear owner you bike is illegally chained to council property, please remove it or we will be forced to removed your property and dispose of it.

This could be the first time that the council has objected to cyclists using the railings around the very many council properties in the borough.

We should expect to see similar signs on council owned sheffield stands any day. Not around this part of Finsbury Park [streetview] though. There aren’t any.

Thanks to Ian Shacklock for the photos.

Bike may be chained to railings all over the borough but this does not mean they should be.

An example of council signs can be seen on Colinsdale Estate , Colbrooke Row N1, where the council have erected signs asking owners of bikes not to chain them to the railings.

The reason for this is, A. the bikes damage the railings, scratching the paint off, and B. when someone comes along and wants to steal the cycle, they cut through our railings, causing damage, and costing the council for the repairs and replacement of vertical bars. C. bikes can also be chained to areas, obstructing access.

I have been in consultation with the TRA on Vaudeville Court, who the railings belong to, and who requested these signs. The TRA have already approached Highways regarding the erecting of the Sheffield stands, and were told that due to some major alterations happening to the pavement [Sustrans Connect2] in this area, it was not possible at the moment, but they would more than likely be incorporated in the alterations to the Finsbury Park Station area.

Due to the new build on Vaudeville Court, I cannot have any stands put up on the estate until the new build completion, due to the installations of services to the flats and not yet being able to look at any spaces left once the buildings have been erected. If and when it is possible I am more than willing to have stands installed here, once all works have been completed.

It would be so much more convenient for council officers if we just got rid of our pesky bikes. Does anyone else have to use railings outside (or inside) council properties because there is nowhere else to park?

Council officers in Highways are going to look for locations to mount cycle hoops.