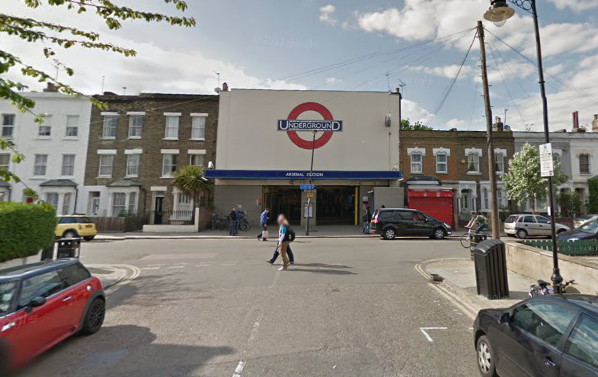 Although the proposal is for 10 cycle parking spaces, 5 sheffield stands on either side of the road, some residents feel that this is too much because it ‘could be a hazard to traffic and pedestrians’. They suggest the locations marked in red in the satellite photo.

The existing covered bike racks to the left of the station entrance at the station are always full. Commuters that cycle to Arsenal Tube station are locking up to trees and anything static in the area.  It looks as if the demand for cycle parking is far greater than supply.  We think that the proposed 10 new cycle stands will be full every day in a matter of weeks.

Councillors are likely to be swayed by the views of residents that live in the Highbury West ward.  However it would be difficult for the council if they turned down cycle parking if the majority of respondents to the survey supported it.

There is also a proposal to build out the pavement in front of the station.  We support this as does Islington Living Streets as it helps create a sense of place and helps pedestrians cross the road. Sadly cycle parking cannot be put here because Arsenal fans swarm through this space on match days.

Some residents are concerned that this build out might cause additional traffic congestion. The existing congestion is caused by cars queueing to enter the the very narrow section of Gillespie Rd which has residents parking on either side of it and through which two vehicles cannot pass. However even with the build out in place, because there is no parking directly opposite, there is still 6m of road width available. The Drayton Park width restriction is 2.15m so two vehicles can still easily pass each other in front of the station.

The proposals are funded by Sustrans’s Connect2 project for Drayton Park and Gillespie Road.

Please respond to the Gillespie Road survey with a yes. There is only one question.

ICAG has received three emails objecting to the proposals and make these points:

Tomorrow, Islington Council will re-consult residents in the immediate area around Arsenal Tube Station. The council has received over 100 responses so far and the majority are in favour of the scheme. If you responded, thank you!

However, in the immediate area around the tube station, the consultation document was posted through each door and the responses received were split between for and against. Also the response rate was very low. (Not everyone has time to respond to a small plan to create a single build out and cycle parking for ten bikes.) Some residents said that they didn’t receive the consultation documents. For these reasons the council is doing a second consultation. It now comes in two parts Arsenal Tube Station and Highbury Hill.

ICAG could, of course, go and knock on the 100 or so doors in the immediate area and ask people to respond. Half of the houses have probably got a bike in them and so we’d probably be able to swing the response strongly in our favour. But we have to draw the line somewhere. If local councillors want to block this scheme, they will.

This is very frustrating and one has to wonder how many years it will be before Sustrans brings another £600,000 into Islington.