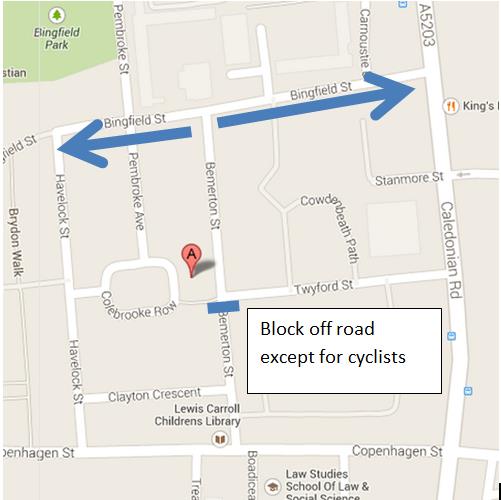 We welcome efforts by Islington Council and the Caledonian Ward Partnership to improve the Cally. In particular we welcome the stated goal of making walking and cycling in the area easier. We think that making cycling safer and more convenient should be prioritised in the plan, especially supporting cycling among people who tend to be less confident about cycling including: families, young people and older people.

This goal should be prioritised because it is the best way to bring shoppers from other neighbourhoods into Caledonian Rd. It would also significantly improve the lives of residents by promoting cycling as a viable way of shopping, commuting to work and of children getting to and from school thus reducing congestion and promoting public health.

Thanks to traffic calming measures which already exist in Barnsbury and, to a lesser extent, in the Bemerton Estate there are great opportunities for linking together safe cycle routes. However, there is an urgent need to provide safe crossing points for less confident cyclists across Caledonian Rd, York Way and Copenhagen Street.

In this consultation response we first consider Opportunities and Challenges for the Cally and highlight the need to improve access for less confident cyclists. We go on to give specific recommendations for the plan which are:

We end the document by urging more enforcement against antisocial cyclists along pavements but point out that blocking off Tilloch St to cycling is no solution.

About us:
Islingon Cyclists’ Action Group (ICAG) is a volunteer run group of local residents who work to improve facilities for cyclists and encourage more people to take up cycling. ICAG was formed in 1976. Find out more: cycleislington.uk Coordinator contact: alison.dines at icag.org.uk

The following challenges should also be mentioned:

Cycling improvements in London often tend to be aimed at trying to calm the traffic along major arterial roads by encouraging cycling commuters to use these routes and mix together with vehicular traffic. While this is a valid strategy to make the roads safer for pedestrians and more confident cyclists we believe more needs to be done to promote cycling among less confident cyclists. These are people who might be willing to go shopping by bike in their local neighbourhood or take young children to school or nursery by bike if roads were improved and would include young people who are still learning about road safety and older people who might use cycling as a way of staying active. We believe the Cally Plan could make progress in improving cycling among the above groups if roads were made safer through the following measures:

In the long term the best way of encouraging less confident cyclists would be to provide separated cycle lanes along the entire length of Caledonian Rd. This could be most easily achieved along the stretch between the Canal and the railway bridge because of its superior width. However, in the shorter term the following measures should be taken:

We welcome the plans to institute an east-west cycle route across Bemerton estate. However, for this to be effective adequate crossing points for less confident cyclists must be provided across Caledonian Road. We recommend that these could be provided to link Lyon Street with Huntingdon Street, Bridgeman Road with Tilloch Street and Richmond Avenue with either Bingfield Street or Richmond Avenue. These could be provided in the form of pelican style traffic lights with “green cycle” symbols that link up with separated cycle lanes that would allow less confident cyclists to reach side roads without having to cycle on Caledonian Road. Alternatively, “Give way to cyclist” signs, road markings and raised crossing points could be instated to provide a kind of cyclist equivalent of a zebra crossing.

We welcome plans for an east west cycle path through the Bemerton Estate. This should be of a high quality and well lit. The route provided for cyclists should be free from pot holes, road defects and should allow cyclists to avoid speed bumps.

In addition to the proposed cycle route around the north side of Bingfield Park there should also be a cycle route around the south of Bingfield Park either by providing a direct link between Bingfield Street and Randell’s Road or by providing a cycle route within the park along its southern edge. This would have the advantage of linking the new Kings Cross railway lands development with the heart of Caledonian Road, improving the likelihood that cycling commuters, families and young people from other areas will start to see the shopping street in Caledonian Road as a destination, rather than just an area to pass through.

Further cycle permeability could be provided by making Richmond Ave two-way to cyclists, while remaining one way for cars.

The improvements should also include creating cycle access from Caledonian Road onto Huntingdon St. We understand that the dropped curb was removed at this junction to prevent access by mopeds. This problem should instead be resolved by installing enforcement cameras to stop mopeds using cycle accesses.

This junction could be much improved for cyclists and pedestrians by:

On the consultation it is indicated that Copenhagen Street is intended to provide a safe cycle path from Caledonian Way to York Way. However, the width restrictions combined with speed humps on Caledonian Road do not provide a safe environment for cyclists because cars and taxis especially often try to cut in front of cyclists ahead of the width restrictions. We suggest that parking should be reduced so that a separate, segregated cycle lane could be provided in a westerly direction provided by armadillos similar to the Camden Royal Camden scheme. The existing width restrictions should be retained in the easterly direction with a separate cycle lane provided in the lead up to the junction with Caledonian Road in an easterly direction.

Due to the weight of traffic and the importance of the Railway Lands development behind Kings Cross there is a desperate need for safe crossing points across York Way. These should include:

There is a lack of pedestrian permeability between the Bemerton Estate and the new development to the West of York Way. This could easily be provided by making a gap in the barrier between York Way and the car park behind the maisonettes on the west side of Outram Place which would make a pedestrian route that linked up with an existing zebra crossing on York Way.

Team Cally should lobby to improve York Way for cyclists and pedestrians, especially by providing separated cycle lanes in both directions

In particular this could help improve cycle routes for less confident cyclists:

Housing associations should also be encouraged to provide more secure and dry cycle parking for residents.

Islington’s cycle training should be advertised and targeted at youth centres, in schools and at children centres in the neighbourhood. Parents should be given advice on safe methods to bring their child to school and nursery. Cycling training and free bike mechanics could also be provided at the Cally Festival to engage young people with this issue. By increasing confidence of families and young people on residential roads we would create a critical mass of cyclists who would encourage motorists to use these roads more carefully.

At the moment it is unsafe for families and young people to cycle along Bemerton St, Twyford St and Bingfield St because these routes are routinely used as a cut through for taxis and other traffic avoiding the junction between Caledonian Road and Copenhagen Street. This could easily be solved by blocking off Bemerton Street just south of the junction with Twyford Street, providing an access only for cyclists. At the same time Bingfield Street should be made one way in a westerly direction on the west side of Bemerton Street and one way in an easterly direction on east side of Bemerton St. (See map below) Both streets should remain two-way for cyclists.

We are aware of the recent problem of a small minority of people cycling dangerously along the pavements of Caledonian Rd. Enforcement action should be taken to stop this behaviour – which could take the form of patrols by Community Police Officers at problem times. At the same time safe alternative routes must be provided for young people especially as cycling along the road itself may seem very intimidating for many young people, especially if they have not had cycle safety training.

This issue seems to have been confounded with another recent phenomenon of young people “gathering on bikes” on Tilloch St which seems to have come up in your consultation with local businesses (mentioned on page 3 of the Consultation Statement). We would point out that “gathering on bikes” is not in itself antisocial behaviour. If there are other related instances of antisocial behaviour these need to be better explained.

Putting barriers across Tilloch Street to prevent cycling is a misguided policy as it will not prevent people cycling on pavements in any other area of Caledonian Rd. Also it will remove the most obvious point for less confident cyclists to cross Caledonian Rd.