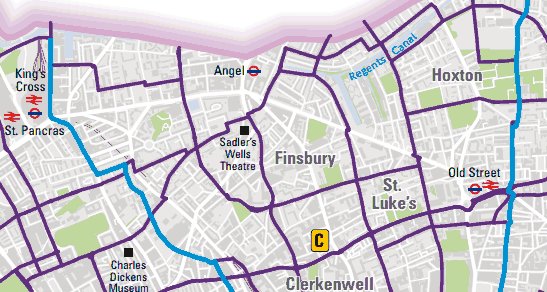 Here’s What Tfl and Islington Council have proposed

As part of the Mayor’s Cycling Vision, Islington Council has proposed the following quietways which will form part of the Central London Grid.

Measures to be considered include: cycle lane segregation, alterations to bus lanes and stops along the wider sections of the route and an assessment of signalised junctions for cycle facility improvements.

Measures may include: traffic management measures and the provision of improved cycle facilities.

Measures may include: surface repairs and the provision of cycle lanes. The scheme includes a review and assessment of signalised junctions along the route.

This route links to TfL’s proposed north / south cycle superhighway. Measures may include: the provision of traffic signal improvements, contraflow cycle lane provision and road safety improvements along the route.

We have set up a google spreadsheet [Tom’s Grid thoughts] with our thoughts about each of the routes in the grid. In addition there are recommended interventions plus some additional routes. It’s not easy to view so we’d be happy to provide it in a different format. Our views about the Islington section of the Central London grid are slow evolving and we expect to update this speadsheet over the next few weeks.

We also have a [this] web page where we expect to collect more comments over the next few weeks.

Cycling on the vast majority of the streets is very unpleasant and scary. While it might not be all that dangerous statistically speaking on all roads, many people are put off because of cars and vans parking in the path of cyclists, people unexpectedly opening doors, people in cars going too fast down side streets to avoid main roads, and the general speed, noise, and pollution that roads with lots of traffic have.

We like bold interventions such as filtered permeability which can be very cost effective, or alternatively light (Royal College Street style) segregation that enables people of all ages and abilities to get on to a bike.  We do not like the small incremental changes often favoured by Islington Council.

We like the concept of the Clerkenwell Boulevard advocated by Andrea Casalotti. We recognise that this is a large scheme with significant challenges but there are enormous rewards especially for the many Hackney Cyclists that cycle from Old Street Roundabout into Central London.

Here is a google map with the routes overlaid. Purple is what LBI proposed to us, Orange is what Tom thinks we should add, light blue is key routes connecting into Islington.