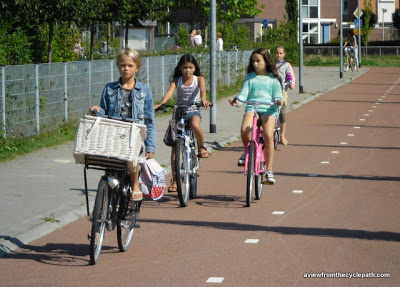 UPDATE: Just in case anyone reading this hasn’t seen our more recent blog posts, we want to be clear that Islington Labour are now supporting some of our asks, which is great news. In fact, it is worth saying that they have been very open and honest about their views with us, which we are particularly grateful for.

They have made clear that they are committed to working with TfL to install protected space4cycling in Archway, Nags Head, and Highbury Corner. Thank you to all the candidates in these wards for supporting what could be major improvements for Islington. With properly designed segregated tracks, these junctions may be accessible to anyone wanting to use a bike in the not too distant future.

In the week of the election though, not all Labour candidates support our space4cycling requests, so if you havent done so already, do email them as its not too late to try to change their mind.

Last week, Islington Labour released their manifesto for the May elections. We at ICAG couldn’t help noticing that it doesn’t really understand the benefits that an active travel approach would have for Islington.

Of course, we recognise it’s a bit late to change the manifesto so instead, we’re asking the Labour candidates to commit to implement the #space4cycling asks in each ward.

Disappointingly Labour candidates have not yet signed up to support our campaign, despite our “asks” being the easiest way to meet many of their stated objectives.

Lets hope we can persuade them to join the thousands of Islington residents who do want #space4cycling.

Continue reading to see how supporting our cycling asks could add some real substance to Labour’s promises.

Oops, they forgot transport! With average travel costs in excess of £1000 a year, Labour could really help residents with the cost of living if they made it possible for everyone to walk and cycle, which after all, are practically free.

Islington council has already had to close a budget gap of £112 million since 2010…We are expecting further cuts of £34 million in 2015/16 alone. Islington is facing more severe cuts that most parts of the country,

Investing in getting more people walking and cycling is one of the best ways of saving money. The health service could save millions for instance. And with more people cycling than driving, the council would also save on road maintenance.

But we know that times are tough for small businesses and we will work with small business owners to make sure they have the support they need.

Comfortable cycle routes to and from small businesses would help as cycle tracks are known to boost trade and attract the best workers.

The cost of travel in London is a major burden on people on low and middle incomes. We will continue to campaign against unfair increases in public transport fares.

They can do so much more than campaign on price increases.  They could provide an almost free alternative to public transport by committing to the #space4cycling aks and investing in walking and cycling routes which anyone can use without fear (the biggest barrier to cycling in London).

Islington has the lowest amount of open space of any borough in London. We will look after our parks, adventure playgrounds and other open spaces so that children have safe places to play. We will also make it easier for residents to close their streets to traffic on particular days to create ‘play streets’.

One of the key #space4cyling asks is to remove through motor traffic on certain streets. Not only would this create safe cycling routes, but it would also create spaces to play so that children can play on these streets every day.

Too many elderly people face loneliness and isolation, and the council will continue to focus on helping elderly and vulnerable people stay active and connected. We will campaign to protect the Freedom Pass so that older people can get out and about, and we will protect funding for free swimming for older people

One of the simplest and most effective actions the council could do is make the roads safer and more comfortable for elderly people to walk and cycle. This means separating walking and cycling routes from busy traffic areas by closing residential streets to through traffic, installing more seating areas, and providing protected cycle tracks on busy roads which makes the streets navigable by those of us with slower reaction speeds.

We will use the council’s new responsibilities for public health to tackle health problems early and promote healthy lifestyles. For example, we will use our public health funding to invest in stronger health services for young children and new parents, and to support sports programmes for young people.

All the biggest health problems faced by Islington residents would be tackled by more cycling and walking. That’s why the most effective and lasting health policy would be to sign up to the #space4cycling asks.

Air quality has been improving in Islington but is still not good enough, particularly along our main roads. Poor air quality is a major health risk as it can cause childhood asthma and other respiratory problems. We will campaign to force the Mayor of London to take action to improve air quality in the borough, for example by tightening up emissions standards for taxis, HGVs and buses.

We are proud of our record as the first borough in the country to introduce a 20 mile per hour speed limit on all our roads. This makes our roads safer for pedestrians, cyclists and motorists and brings both health and environmental benefits. We will work with local police to ensure that this new limit is observed throughout the borough. Encouraging more people to walk and cycle will help improve residents’ health, cut emissions and improve air quality.

You can add in that it will save the council and individuals money too, as well as boost business.

We have introduced new planning rules to make sure that new developments are car-free (except for blue badge holders and car clubs) and we are fitting more bike stands and stores to encourage residents to cycle.

While you’re at it, hows about more safe cycle racks at places we might want to go? Highbury and Islington, Angel – demand for racks is way outstripping supply but no there doesn’t seem to be any plans to do anything about it.

Islington Labour is committed to making cycling and walking in the borough safer so that residents have the confidence to leave their cars behind. By summer 2014, all of the council’s own HGV drivers will have attended safe urban driving training and we will require all major new council contractors and major developers operating in the borough to do the same. The council plans to achieve silver accreditation under the Fleet Operator Recognition Scheme (which sets out safety requirements beyond the legal minimum for the council’s own vehicles) by summer 2014, followed by action to achieve gold status.

OK, but most HGVs in the borough are coming through it. And no mention of subjective safety – HGVs aren’t a main reason people don’t want to walk or cycle – bikes need to be separated from all motor vehicles including buses: so build protected bike tracks and close roads to through motor traffic as the #space4cycling campaign calls for.

The council controls 95% of roads. Sure, lobby TfL, but get on with your own stuff too! Its worth pointing out that Islington Labour have had numerous opportunities to encourage TfL to improve the roads for cyclists, but they haven’t taken them. The redesign of the Nags Head is a current example: Labour councillors prefer a scheme which doesn’t improve the area for cycling at all. We look forward to this change in policy.

Our long- term aspiration is to remove the major gyratories in the borough.

Removing gyratories is no good unless you provide deliberate cycling infrastructure and better walking provision as well. Several of our #space4cycling asks involve making these gyratories cycleable, so why not sign up to make the commitment now?