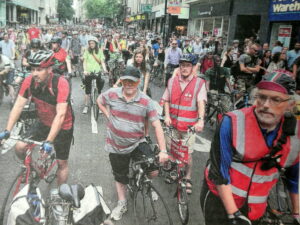 Ride with us on Wednesday September 8 in a protest about another cylist’s death in Holborn. We are meeting at Silk Street opposite the Barbican at 5.30 pm.

We were devastated to hear about the recent death of another cyclist, Dr Marta Krawiec, at Holborn gyratory. Only three years ago, we protested at Holborn following the death of Dr Peter Fisher who was killed nearby. This notorious junction has claimed the lives of seven people cycling since 2008.  LCC had a protest ride in Holborn in 2013 – the photo at the top is from that event.

We shouldn’t have to do this ever again.