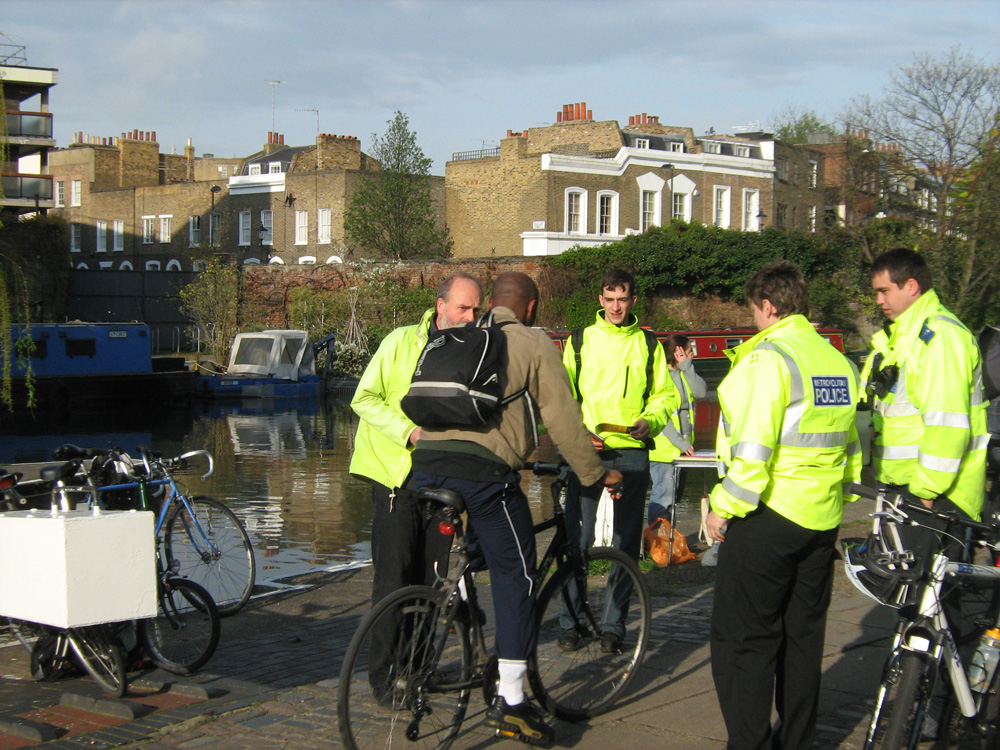 Latest:  British Waterways Board are consulting about the towpath including changes to deter cycling until March 18th 2012.

This is the letter that was sent to the Islington Tribune – it was edited when it was published; this is the full text.

We thought it would be useful to provide an update on the work that is being done by British Waterways and other groups to resolve the issue of over-congestion on the Regent’s Canal towpath.

There is no doubt that the character, charm and tranquility of the Regents Canal is something we all really value.  The towpath is used by all, including young children as a route to school and those seeking a quieter route away from traffic.  British Waterways’ policy is that pedestrians have priority on the towpath at all times.

The absence of high quality east-west cycle routes means the Regent’s Canal towpath is being subjected to enormous and unsustainable pressure.  The City Road area is the busiest section of towpath on the London network.  Parts of the Regent’s Canal and Hertford Union Canal towpaths are also historically very narrow and are crossed by many bridges, causing severe constraints on visibility.

Transport for London and British Waterways developed a London Towpath Management Plan in 2006, which has led to millions of pounds of investment into towpath improvements to reduce conflicts and improve things for everyone who enjoys using the towpath.

British Waterways, Islington Council, Islington Living Streets, Islington Cyclists Action Group, Hanover Primary School, Friends of Regents Canal, local councillors and residents are working together to develop towpath improvements.  More importantly, we are all encouraging the local boroughs and Transport for London to provide safer and more attractive alternative route options for cyclists.  It is understood by all that co-operative working with local councils will be required to improve the parallel route options to a point where they are an acceptable alternative and that British Waterways cannot achieve this alone.

British Waterways employs Towpath Rangers and works with volunteers to run events and campaigns to encourage more responsible and courteous behaviour among all towpath users, including a Towpath Code of Conduct and regular ‘Two Tings’ events.

Most towpath users agree that cycle bells used courteously provide a vital early warning to pedestrians that a cyclist is approaching and wishes to pass.  Cyclists must bear in mind that sometimes pedestrians may not hear or see them coming, some may have hearing or mobility impairments or be with younger children who may be unpredictable in their response to an approaching cyclist.

The inconsiderate behaviour of some users will continue to be addressed to ensure the safer enjoyment of towpaths by all.  Some of us cycle ourselves and, whilst we see good practice by the majority of walkers and cyclists, we have a duty of care to respond to the concerns of pedestrians who feel threatened by the volume and speed of cycling at certain times and places.

We will continue to promote the provision of Parallel Routes – alternative cycling routes through Camden, Islington, Hackney and Tower Hamlets – so that cyclists have a greater choice of safer, fit for purpose routes.

To those towpath users who appear in a hurry or behave inconsiderately or irresponsibly towards other users our message is simple – please find another route as the towpath is not appropriate for your journey.