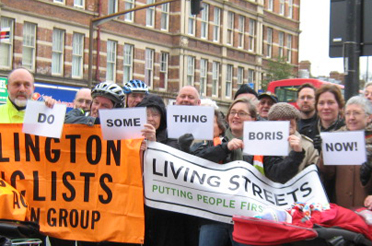 Dangers still exist for pedestrians and cyclists wishing to cross Holloway Road; by the end of the month, the present road works at Madras Place and Fieldway Crescent will be, we hope, an unalloyed success story for local campaigners working with Islington council officers and Transport for London (TfL). Members of Islington Living Streets, Islington Cyclists Action Group and local residents have campaigned successfully to press Transport for London (TfL) to act to improve the crossing before anyone else was injured or worse at this location.

While Lisa Pontecorvo, who tragically lost her life near Madras Place, is usually described as a cyclist, at the time of her death she was on foot, wheeling her bike across Holloway Road along the pedestrian desire line to Fieldway Crescent.

Working together, we established a common understanding between pedestrians and cyclists of the dangers and design flaws at this crossing. Several on-site meetings gave us a pretty water-tight assessment of the risks at the crossings, which TfL had to listen to. Our continued involvement throughout the design process meant we could establish two new pedestrian crossings at the junction with Holloway Road together with an improved crossing for cyclists.

Many people want to cross at this spot rather than walking up the road past the old library entrance where the previous pedestrian crossing serviced the bus stops. Now this has been achieved while smoothing out the “dog-leg” layout of the cycle path that was so confusing to drivers; cyclists will be much more visible to drivers from now on.

It has been instructive, watching the work day-by-day, to see why the costs of what seems a simple and straightforward change are so high and that it has taken a person’s life to concentrate minds. All the while, Holloway Road has had to be kept clear enough to keep traffic moving, parts of pavements and roads dug up and then replaced, wiring of temporary traffic lights, moving of lamp posts, trees and and old traffic light gantries, new lamp and traffic light columns set into the new paving, then more wiring-up and the crossings themselves engineered to suit pedestrians and cyclists – all this done by many different groups of workers timetabled one after the other. So it’s no surprise that some slippage to the timetable occurred and the work will be completed six weeks later than anticipated.

However, this close collaboration between pedestrians and cyclists should be a model for future working. That the new crossing also benefits drivers by providing a clearer, more legible street-scape demonstrates that when they design “streets for people”, TfL can do the right thing. After ten years of steadily decreasing numbers of accidents, the last two years have seen a rise in the numbers killed and seriously injured on Islington’s roads; the improvements at Madras Place are coming none too soon.