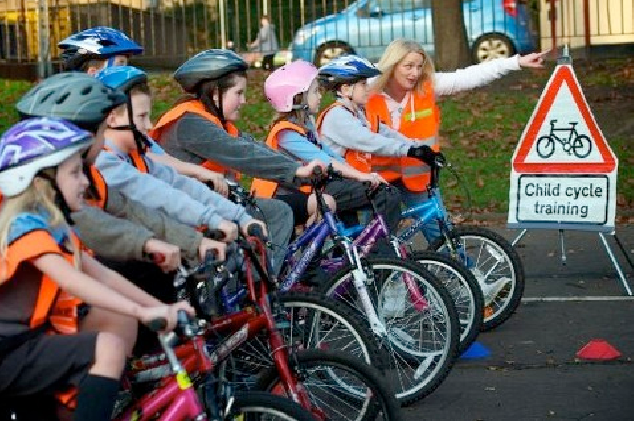 This campaign aims to get children cycling and walking in Tufnell Park.

By creating a signed and safe route to school for children in Tufnell Park, we aim to integrate active travel into children’s daily routine. We aim to increase levels of children cycling and to reduce levels of childhood obesity.

The route will link six local schools in Tufnell Park and provide safe routes to each school, providing a focus for the allocation of resources and building confidence among children and parents that they can get to school safely.  The six schools are Tufnell Park Primary School, The Bridge Secondary School, Holloway School, Eleanor Palmer Primary School, Acland Burghley School, Yerbury Primary School.

The route will also connect six local playgrounds and parks and will link to route 14 of the London Cycle Network.

The campaign is both a call for immediate action and an aspiration for future improvements. 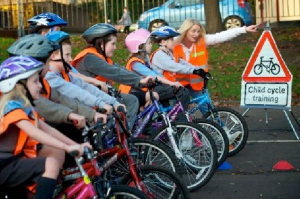 We will identify a key direct, continuous and safe route between the schools; and work with Islington and Camden Councils, the Metropolitan Police and Transport for London, to continually improve and upgrade the route, until it meets world class standards for Safe Routes to School.

We will campaign for a safe and attractive environment outside the school gates of all schools in Tufnell Park.

We will lobby for low cost but effective solutions that can be implemented immediately to improve conditions for cycling and walking in Tufnell Park.

The campaign will work with local statutory and voluntary organisations, individuals and businesses to build support and achieve it’s goals.

We will identify grants and funding streams that can be put to work to improve the environment for cycling and walking in Tufnell Park.

We will identify more complex problems that for planning or financial reasons cannot be immediately remedied and organise the resources to resolve them. 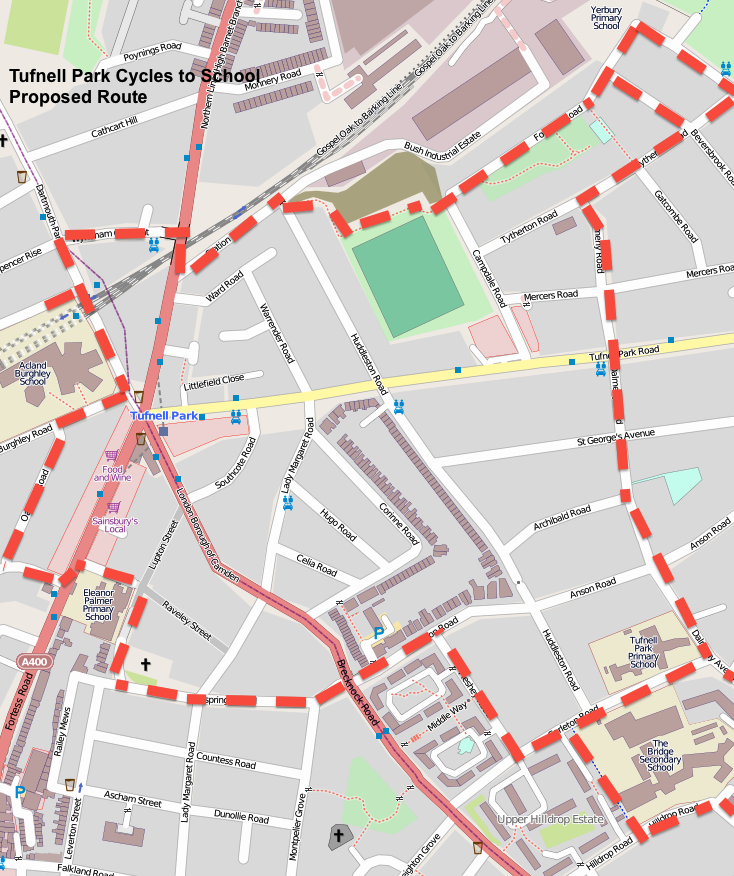 The dotted red line indicate the streets and paths followed by the route. The route is bidrectional.

Tufnell Park is a compact, mainly residential area that has great potential for cycling but few children cycle to school. Only 1% of British kids cycle to primary school and only 2% cycle to secondary school. The major factor preventing children from cycling is parental fear about road safety.

80% of kids say they would rather cycle than be driven to school but road conditions often make it seem easier, safer and more convenient to transport the children to school by car.

There is growing concern about increasing incidence of obesity and chronic disease among children and young people. Obesity rates have trebled since 1980 and now affects 10% of children and 1/4 of adults.

Cycling to school allows children to integrate physical activity into their daily routine. Like a free gym, it helps prevent obesity, strengthens bones and muscles and builds endurance and lung capacity. It can increase independence, develop problem solving skills and a deliver a daily
sense of personal achievement.

If it replaces a car journey, cycling can save families money from spiraling fuel costs and from the hidden costs of motoring such as maintenance charges.

The main barrier to more children cycling to school is parental concern about safety – fear of death or injury by cars.

Perceived safety is a key influence on walking and cycling, but environmental improvements and facilities can encourage a shift away from car culture.

We propose a key, direct, continuous and safe circular route connecting six local schools in Tufnell Park. This route will be clearly signed and will become the focus of continual improvement and review until it achieves world class standards of Safe Routes to School. The route will allow us to focus resources and achieve a level of safety that reassures parents and children that cycling is safe and fun. We will:-