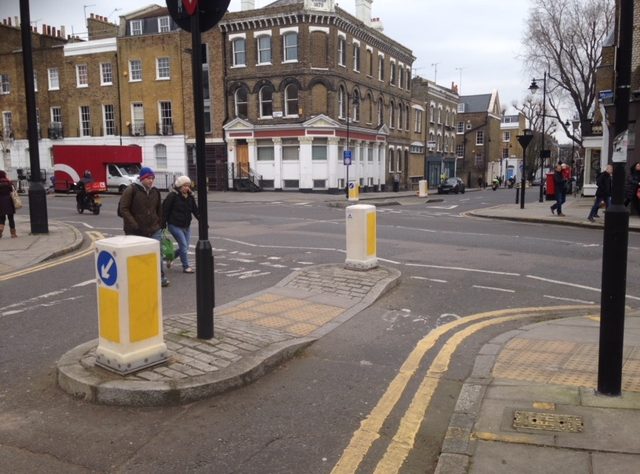 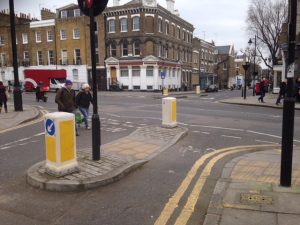 Update 8 May 2018:  after one of our now all-too-familiar regular chasing mails, we were told on 9 April that the consultation has been delayed due to the purdah leading up to local elections.  Time for another mail now that the election is behind us !  In the meantime, we have been gathering data on the speed of traffic on Liverpool Road – current results in the table below – working with the local CSOs and Cllr Rowena Champion.  This is based on vehicles which are travelling at 25+mph in our 20 mph zone and all drivers will get a letter to say that they have been clocked at that speed and to take more care to keep to speed limits in future. The timeline of this junction will have to be updated as it threatens to last for many months to come …….

Update 16 February 2018:  and yipee the plans were sent today and we are studying them ….changes are: upgrading the zebra crossing from a one-stage crossing to a two-stage crossing through a proposed central island – This island would allow pedestrians to focus on one direction of traffic at each stage of crossing;  A proposed right-turn pocket for northbound traffic travelling on Liverpool road waiting to turn into Barnsbury east – This would provide vehicles and cyclists with a safer stopping area;  Additional cycle markings on Barnsbury Street west – To raise awareness of cyclists travelling westbound along Barnsbury Street  We would welcome your comments which we need to send back to the council by 26 February as they plan to be send out consultation in March.

Update 15 February 2018;  still no sign of a firm plan or date for consultation in spite of chasing.  I’m getting concerned that this might get caught-up in pre-election inertia ………time to update the chart above  !  However more positive news is that, along with the Cllr Champion and two community police officers, we’ve been out with a speed gun to see how drivers are behaving on Liverpool Road.  We’ve done this twice, at different times and different days and are planning a further foray.  The fastest we’ve clocked was a motorbike doing 38 mph (on a 20 mph road).  All drivers driving at over 24 mph, ie within the guidelines of speed limit +10% + 2,  will get a letter saying that they were caught going too fast and should be more aware of their speeds.  This data gathering is useful to present as part of the business case for improving the junction.

Update 30 December:  LBI sent a draft of their proposals Zebra Crossing Draft Proposals – Liverpool Road-Barnsbury Street to improve the junction just before Christmas ;  these have not yet been finalised.  I’m still not happy about about the ‘pocket’ for cyclists travelling east as it’s just paint on the road so will see if we can get something more substantial included.  I’m doubtful if we’ll get this as there was talk about budgets, or lack of them,  when we had the site visit.  But if we don’t ask, we won’t get and if we don’t get, we can continue with campaigning.  Probably unlikely that the consultation will go out in January as was originally hoped but good to see LBI trying to do the right thing.  In parallel, a local councillor, Rowena Champion, is following up on a request for a risk assessment for that part of Liverpool Road.

Update 13 November With thanks to Rowena Champion, the local Cllr,  LBI have agreed to perform a ‘risk assessment’ of this junction so we’ll see what comes of this.

Following 2 years campaigning, on 2 November 2017 we finally managed to meet a senior engineer from LBI’s Environment & Regeneration team and a local Barnsbury councillor at this dangerous junction of Liverpool Road and Barnsbury Street.  The painful road leading up to this meeting was described in our September 2017 newsletter 117 Cycle Islington newsletter September 2017. We spent about 20 minutes talking about its many failings and witnessing cyclists trying to dodge the traffic racing along Liverpool Road.  After the site visit, we confirmed our understanding of what the next steps would be – summary below.  It was a very constructive meeting and we warmly welcomed this opportunity – at last ! – to  talk to LBI about improvements to this hideous junction.