Many thanks to everyone who made the lane,  printed cards, did bike counts, crunched data, wrote the press release, created posters, worked on the risk assessment, stood with banners, handed out cards, tweeted, took photos,  liaised with the police, advised on operations, cheered on cyclists and encouraged the team who organised this protest.

With thanks to Steve Watch the video here

We had an excellent turnout early on the morning of 22 September 2022 (World CarFree Day) for our Make the Lane (again) with our sister group in Camden.  We had 20 people making the lane, 350 cyclists passing along our lane in 25 minutes and at least 12 more people on the pavement with other tasks.  Some key participants were Victoria Lebrec of Action Vision Zero, Travis and Sigi (early start for a cat who doesn’t like to get up), Sian Berry, member of the Greater London Assembly and a Camden councillor; Caroline Russell also a member of the Greater London Assembly and an Islington councillor and Ernastas Jerogovas-Armstrong, an Islington councillor.   To give a flavour of the protest, here are links to some images taken by Chris and Joseph– for which many thanks.

The proof of a successful protest is seeing action and we hope that TfL, Camden Council and Islington Council  will now work together and use some of the £80m active travel funding agreed with the DfT in August 2022  to implement safe cycling on this key east/west route.

History & context about this Make the Lane (again) is here.

Please consider sending an email to Will Norman – template and suggested text for customising  – and responding to our survey. 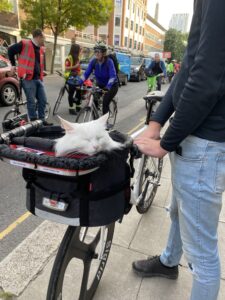 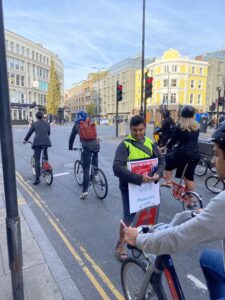 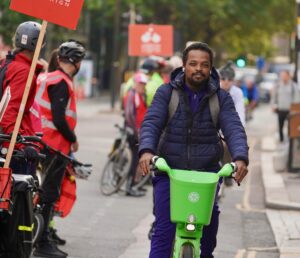 Thank you for copying me into your email about safer cycle routes along the Old Street to Holborn cycle route.  I appreciate and recognise the points raised in your email. As you have rightly highlighted in your email, it is of utmost importance to improve safety for cyclists in and around the Clerkenwell area and throughout North East London.

On the back of your email, I have submitted a written question to the Mayor of London, Sadiq Khan. I have echoed the points outlined in your email. Please click on this link here to see a copy of my question.

Let me assure you that I will continue to press TfL to deliver safe cycling routes in and around the Clerkenwell area.  Whilst I note that TfL has secured some funding from the Government, the funding comes too late and adds insult to injury for Londoners living through an unprecedented cost of living crisis who did the right thing by staying away from public transport during the pandemic.

While it takes away the danger of the most drastic service cuts, there are still far too many unnecessary and damaging conditions attached. I will continue to scrutinise the adequacy of funding to TfL and continue to press for additional ring-fenced funding for walking and cycling.

Thank you for your email highlighting the recent ‘Make the Lane’ protest along the Old Street to Holborn cycle route and for sharing your own experiences of cycling in this area.

I know that making the Old Street to Holborn cycle route corridor safer is hugely important for everyone who cycles there, and I would like to reassure you that I remain determined to reduce danger to people cycling across London and to developing new cycle infrastructure that will play a vital role in improving space for safe cycling.

The latest Government funding agreement is the first since the pandemic to give TfL and London’s boroughs the financial certainty needed to deliver longer term infrastructure programmes. The funding agreement, while welcome, does still mean TfL has some difficult funding choices to make. The first funding allocation for active travel, for both TfL and London’s boroughs, is focussed on schemes which can be delivered over the coming year and where plans are advanced.

In Islington, the transformation of Old Street roundabout, station and public realm continues to bring about improvements to cycling and walking in the area. Further west, the Holborn gyratory remains a key priority for interim improvements, with Theobalds Road and Southampton Row improved by Camden Council with funding and design support from TfL. Similarly, substantial interim improvements are planned for the A40 Holborn gyratory; joint plans from Camden Council and TfL for these improvements will be consulted on in the near future.

In relation to the link between Old Street and Holborn, officers at the London Borough of Islington are currently working on design plans for this cycle corridor and will, when ready, share them with TfL for review.

The funding provided in the latest deal is limited and there are many competing important commitments and priorities across London. Therefore, I cannot commit TfL, Islington and Camden to ringfencing funds on the whole corridor. Ringfencing would take funding away from schemes that are urgently needed elsewhere in London which can be delivered in the next 18 months. I will, of course, consider the plans for this cycling corridor when the designs are complete.

However, I hope this letter provides reassurance that we are continuing to work together to improve the safety of cycling in the local and wider area.