Full write up of the Make the Lane (again) here !

Meet at the junction of  Honduras Street and Old Street on Thursday 22 September.

After the event, please take 5 minutes to help !

Open the email below in your email app.  For outlook users only use this link to open the Outlook email app

Ringfence Funding for the Old Street to Holborn Cycle Route

I took part in the Make the Lane (again) protest on 22 September along the Old Street to Holborn cycle route.

As you know, since 2014, discussions about making this route safe for all cyclists have been ongoing with Camden and Islington councils and TfL but no changes have been made.

I am pleased that TfL has finally agreed their funding settlement with the DfT and would like your assurance that some of the £80m agreed in the settlement for active travel will be ringfenced for protecting cyclists on this route. 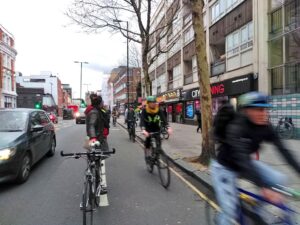 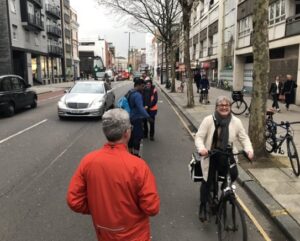 We Made the Lane at Old Street back in 2019 and since then, in spite of promises from Camden and Islington Councils and TfL, there have been no spades in the ground to make this key east/west route safe for cyclists. Three women have lost limbs there. There have been, and continue to be, incidents where cyclists are injured, the most recent in June 2022. There is no safe cycling infrastructure.

After another tragic cyclist death at Holborn junction in September 2021, minor and insufficient changes were introduced there. This followed seven other cyclist deaths there over the past 14 years, which led to the junction being designated as one of the top Dangerous Junctions in London by the London Cycling Campaign. Apart from this, there has been no progress in eight years in making this busy east-west route safe for cycling.

We’ve had enough. We are organising another Make the Lane with our sister group Camden Cyclists on Thursday 22 September (World Car-Free Day). So put this date in your diary as we will be calling on campaigners to help us make A Big Noise to highlight this unacceptable lack of action.

Here is a map of fatal/serious cycling incidents along the East/West route up to 2020 (and so not including 2 cyclist fatalities at Holborn in 2021 and 2022).

With the recent announcement at the end of August of the funding deal reached by the government and TfL (£80m/year for active travel until March 2024) we are demanding that some of this be ringfenced to deliver a safe East/West cycing route.

With thanks to Stop Killing Cyclists, Steve Knatress and  Tab Tanquery for photos and to CycleStreets for the map of KSIs.